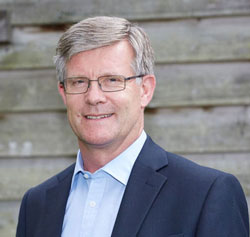 Gregory Moore has 35 years of experience in the out of town retail market. After graduating from Reading University in 1983 he joined Clive Lewis & Partners, working in the Shops Department for three years. He started advising on the occupation of retail warehouses in 1986 and became an expert on the requirements throughout the UK as that fledgling market grew.

He continued that work after the merger with Edward Erdman in 1992 to form Erdman Lewis, and then Colliers Erdman Lewis. In 1995 he was a founder member of Chase & Partners. During that time he was Secretary of the Out of Town Retail Agents Society and was Chairman of the expanded British Council for Out of Town Retail during 2000, before it was renamed Accessible Retail.

He is giving occupational and agency advice to land owners, developers, investors and occupiers as the market continues to change.

He has an extensive range of contacts throughout the industry and is well known for providing market based advice.

Outside of the office he acts as a taxi-driver for his two children and takes an interest in his local village. This has ranged from fund-raising, being a member of the Parochial Church Council and commenting on part of the Neighbourhood Plan preparation. After giving up playing sport he has turned his hand to choral singing. In a little over 12 years has sung Evensong and Communion services at more than 25 cathedrals, and is a member of the RICS Singers. His wife is treasurer of the Guatemalan Families Association and other charities, while supporting him in the business and sharing his love of sport.